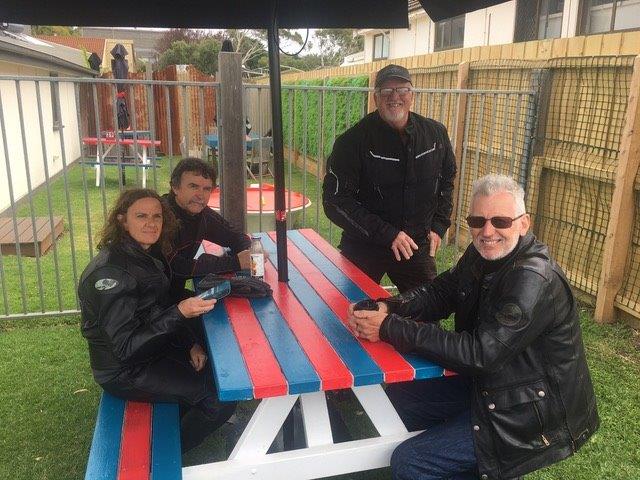 Ron had offered to lead a longer ride to places we hadn’t been to for a while and so we set off with the Otway town of Forrest in sight.  Noel Wills (recovering from his new hip) met us at the start for a chat. Reckons he will be back on his bike by next ride!

Things were pretty casual at the start blasting down Cape Otway Rd.  A bit of deference paid at the spot at Wurdiboluc where poor Andy Symons spent 5 hours waiting on the side of the road for the RACV after his Triumph Tiger broke down a few weeks ago!

We stopped for coffee and the usual chat at Forrest whilst the weather started to look decidedly more uncertain? (The sun never shines in the Otways)! Then the challenges began! The windy and slippery road down to Skenes Creek in pouring rain and with conditions some of our newer riders hadn’t experienced before meant for progress not much faster than 50km/h. Cars behind just had to be patient!

Some relief experienced when we passed Beacon Point and dropped 300m down to the Great Ocean Road where miraculously the rain stopped! Traffic was relatively light on the GOR heading back towards Lorne and we had a good run. Myriads of Chinese and other drivers on the right, wrong or underside of the GOR have miraculously disappeared?

Lorne took a little while to get through as there was a Surf Carnival on but we got through OK. Hope those Great White Sharks seen at  Lorne a week or so ago took the day off? We had a regroup and rest at Anglesea where the fellowship went on for some time.  (Sometimes think the guys enjoy it more than riding motorcycles)? !

Next ride on the 21st will be led by Brian & Graeme Wilson around the Mt Macedon after meeting them at Bacchus Marsh in order to give them a break from riding down to Geelong. It will obviously be a bit longer than the usual 3rd Sunday run – so bring a reliable bike! 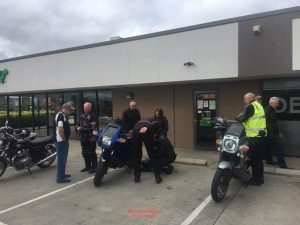 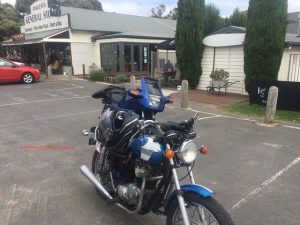