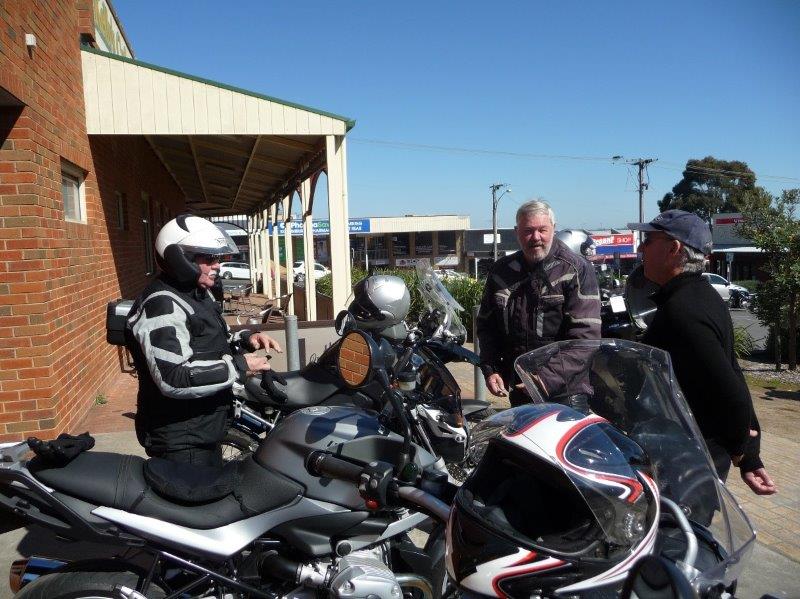 Your scribe had not ridden with leader Ed for some time and expectations were that, as usual, this ride will be routed via interesting, winding, new-to-me, traffic-void roads with no stops for map checking.

At Officer, one of the now well defined start points documented by Club Captain Sam, there were 13 bikes in cold but promised 18 deg max weather.

Mention should be made in dispatches of those who rode more than 50Km to the start. You know who you are.

Two bikes arrived just before the 9AM start due to heavy traffic on “other” roads, caused by a truck jack-knife on the Westernport Highway……major chaos in the area

Ed took us through the ride intro. spiel and President Ian both welcomed all and warned that his (Large) Suzuki outfit (as rear rider) needs space when connecting with corner markers.

On the Princes hwy. to Nar Nar Goon then all back roads via Bayles, Topiram, Poowong to Korumburra morning tea stop.

Notable were many roads without centre lines or advisory signs where on approaching crests, one figured out the following bend direction when almost in it……………have to concentrate!

Two bikes/riders joined the ride here. The grand plan route was to Jeetho but the turn off sign said road closed and the other sign said no through road straight on. It was prudent not to test the signs validity but go to Loch instead.

Then via Archies Creek and Glen Alvie to Glen Forbes over the excellent “Tourist Road”▬ like Reefton Spur, but with views! Lunch at Grantville, around 180Km. since Officer.

The last segment was over back roads to meet the South Gippsland Hwy. Followed by Nyora and Lang Lang to finish near the Tooradin Airport.

Apols for any misspell.