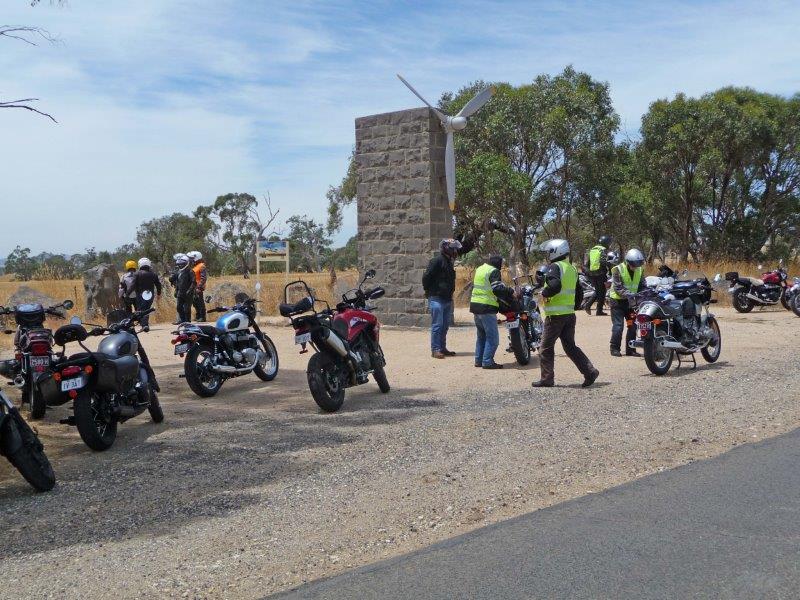 Fourteen steeds assembled for the ride at the Upper Greensborough Caltex Servo: seven Hinkley Triumphs, two Hondas, a BMW and a Kawasaki represented the ‘modern’ models, while three Classic BMWs asserted their pedigree and reliability. Thus, fourteen riders plus Vicki as pillion with John, assembled as participants. All were fully Covid Vaccinated, most with boosters.

Ride Leader was Paul Clayton, doing his Maiden-Run in his new role as Northern Mid-Week Ride Coordinator, with Martyn Goodwin as Tail-End-Charlie. Richard Duncan, guest of Paul, and Nick Oakley from the Geelong Group, were welcome participants amongst the usual friendly crew.

The weather would be as predicted and provide near-perfect riding conditions: a dry, mild day with little/no wind and partial cloud cover. Maximum temperature of about 25°C. A gentle summer’s day with the countryside in good health, yielding welcoming sights and aromas (with a few exceptions).

Paul called us to briefing and detailed the route and stops we would take: northwards to Whittlesea and Eden Park, then westwards to Wallan and Romsey, and northwards to Lancefield for a morning-tea stop. From Lancefield, northwards to Tooborac and on to Heathcote for lunch at the bakery. From Heathcote, south-westerly along the Kyneton road to Mia Mia, then southerly along the Burke and Wills Track, back to Lancefield for a short stop. Then home via Kilmore, Wandong and Whittlesea. Paul warned us to be wary of large pot-holes on the Burke and Wills Track.

We went and we came back….

A thoroughly enjoyable ride of just under 260 kilometres was had, without any serious incident or malfunction. So, Paul’s Maiden Run scored 15 home with none ‘out’. All credit to RL Paul and TEC Martyn.

The Chrome-Plated Bling   or if you prefer, The Garbled Garbage

As we departed the Caltex Servo, I had two things on my mind: first, why did I just volunteer to write the report and second, what will I write about? The answer to the first is threefold: stupidity, a misplaced sense of duty and an over-estimate of ability. The answer to the second is of course, the unusual, interesting and humorous occurrences yet to come. …If they come. So as a back-up, I started to muse over the possibility of a limerick or two, or something else amusing. ….Clayton, waitin’, hatin’, beratin’, skatin’… the bones were there but a limerick wouldn’t come, and the best I could think of was “which ride do you do when you’re not doing a ride?” ,,,, (groan at will).

By the time we hit Doreen I gave up and decided to just let the day unfold. KISS is the right maxim to follow in most situations.

Paul was doing a great job as leader, the rest of us were well-spaced and well-behaved, and Martyn was going ok as TEC. All was well when we turned left onto the Eden Park Road.

A little way on, however, we clunked up behind a garbage truck going through some twisties, which slowed us down and gave offence to our olfactory senses. Paul, as leader must have really copped it, as Richard Haughton who was second said it smelt really bad, and I was third and found it to be just bad. I pondered the cause …. my guess was a very big bag of prawn-tails and other bits, perhaps kept in the bin a week too long before collection, It made good sense (not good scents LOL), as it’s the end of the festive season and the Eden Park folk would be generally well-heeled and likely to be generous entertainers; and perhaps not too inclined to eat everything on their plates. (I should have been a detective).

Fortunately, the garbage truck went straight ahead when Paul took us on a left turn onto a bit of a by-way. Phew! (so to speak). Then, onwards to Lancefield via Wallan and Romsey in a relaxed style, without further incident.

Morning tea at Lancefield was an enjoyment, with the usual chat, technical talk and banter going on. Martyn discovered one of the old hands had left his ignition on, but I’m not dobbing as to who it was. Richard H invited Nick to sit with us at a picnic table and when Nick spoke in his fine English accent, Richard asked him ‘Are you with the English Cricket Team?’ Nick replied ‘no comment’ but joined in seamlessly with the general conversation about cricket, Covid lockdowns, and politics. It was good to meet ‘new chums’ Nick from Lara and guest Richard Duncan.

As we departed Lancefield, heading northwards to Heathcote via Tooborac, I noticed two more garbage trucks at the edge of town, and this time could not detect any malicious odours. I presumed that the Lancefield folk are more careful with their garbage than those at Eden Park. Or perhaps they are a lot hungrier and finish off everything on their plates.

Further on we came to an abrupt halt, where re-surfacing roadworks caused a bit of a delay.  Paul later disclosed that he couldn’t believe it as nothing was happening there on the Sunday before when he did his recce run. Trucks, hot asphalt, machinery and workers all over the place. We were stuck to a standstill for quite a few minutes behind a line of traffic pointing downhill and up the next one. To my amusement, I saw Paul, ahead and below me, pull out to the right to have a bit of a look at what was going on. At that stage I don’t think he saw the top of the truck coming towards him that I could just see over the next hill.

Very interesting! Paul appeared to feign nonchalance when he saw the threat and attempted to shuffle himself and his steed backwards uphill, from whence he came. No success. The truck was slowly getting closer (and bigger), so Paul casually rode forward and shoved back in line in front of the next vehicle, as if that was what he was going to do all along. Nifty! That’s how it all appeared to me, but yes, I may be stretching it a bit (but so was Paul). When we got the ‘Slow’ sign we proceeded through gingerly. New tar with loose gravel is not a popular thing to a rider on a clean and tidy motorcycle.

We arrived at Heathcote Bakery and had a leisurely lunch in the capacious dining area and engaged in more convivial conversation. We discussed a number of things, the fallibility of memory being one topic. The rest I can’t recall.

Except … I had seen a road sign on the way – Porcupine Court. I told Richard H about it and said to him: “it reminded me of you, you prickly little bastard” (payback – Richard had sledged me earlier).

Homeward bound: Paul led us down the Kyneton Road and left onto the Burke and Wills Track at Mia Mia. To our surprise, the voracious pot-holes which Paul had warned us of were no more – freshly filled in, probably by the same road crew, but on the day before. We made a stop at an aviation monument along the track, which at first I thought strange as Burke and Wills used camels and horses, not aeroplanes (sorry, can’t help myself). One information board read: ‘On July 16, 1910, John Duigan flew an aircraft for a distance of 23 feet (7 metres) at his family’s property “Spring Plains” at Mia Mia, Victoria. …This is acknowledged as the first powered, controlled flight of an all Australian designed and built aeroplane’.

Mr Google and Wikipedia reveal that this was only the beginning of John Robertson Duigan’s successful flights and illustrious career. His brother Reginald also contributed.

The story of the Wright Brothers achievements before and after 1903 may also be of interest.

Paul led us back to Lancefield for a short stop, before the last leg home to Greensborough, via Kilmore, Wandong and Whittlesea. I think it was between Lancefield and Kilmore, that we encountered an impatient chap in a white Ford Ranger who needed to get where he was going a lot quicker than we did, tailgating and passing recklessly (in my view) as he went.

Thanks to Paul for a great ride, to Martyn for a job well done, and to all for good company.

PS1: Garbled Garbage is a Tautology. No apology by me.

PS2:  I have learnt that I am not alone in engaging in ‘mindless reverie’ when riding a motorcycle on country roads – the weight of the world and personal concerns usually leave me alone while I focus my senses on riding and the ride itself. For me, it’s rarely like that in a car, and I will tend to sometimes try to ‘problem-solve in a four-wheel cocoon’. Just saying. 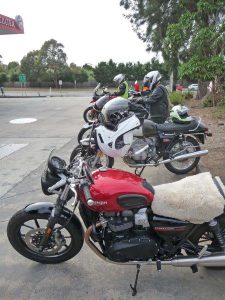 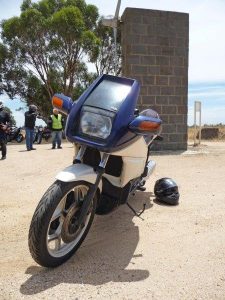 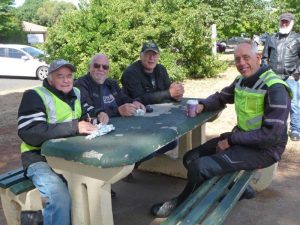 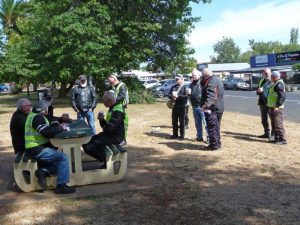