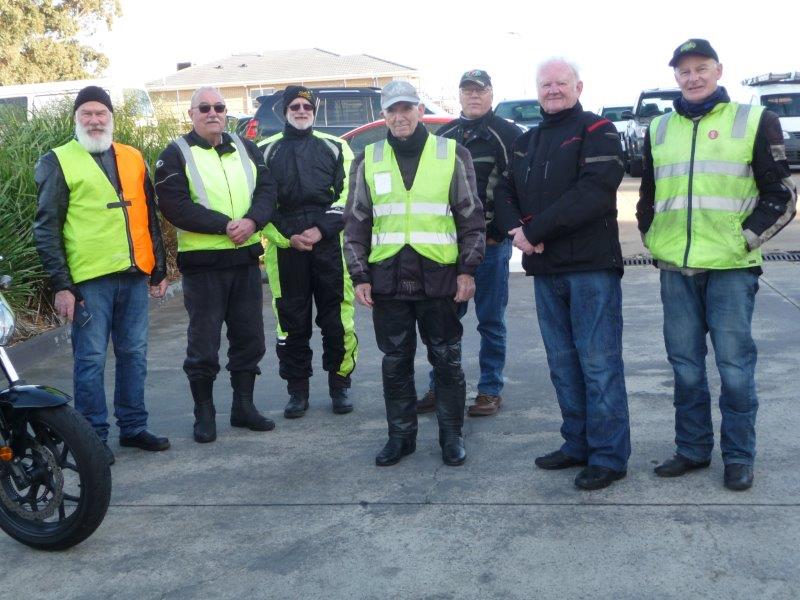 Ten steeds assembled at the Upper Greensborough Caltex Servo on a cool but mild morning, with ten riders plus pillion Vicki as participants.

The weather would be (almost) as predicted and provide good riding conditions: mostly clear skies (at first), little to no wind and a maximum temperature of about 16°C. However, to me it seemed colder and the day never really warmed up. The sun later went into hiding above a cloudy sky and we experienced a bit of damp stuff: mist and a light shower or two.

In a nutshell, Nature gave a gentle warning that winter is coming.

Arthur Hampson was our Ride Leader for the day, standing in for Paul Clayton. Arthur is a relatively recent member and this was to be his ‘Maiden Ride’. So sincere thanks are due to him for stepping forward to prepare and lead the run. Thanks also to Martyn Goodwin for being Tail End Charlie.

Arthur then called us to briefing and detailed the route we would take: northwards to Whittlesea, thence to Wandong via Eden Park, and northwards to Broadford for morning tea at the Country Soul Café. From Broadford, generally westwards along backroads, via Pyalong to Kyneton for lunch. Arthur gave us due warning of a section of dirt road, and a particular bitumen mogul in the middle of the road to avoid (unless we wanted to try out our motocross skills). From Kyneton, to Lancefield for a short stop, thence homeward bound via Kilmore, Wandong, Woodstock, and Yan Yean and back to the BP at Upper Greensborough.

Arthur provided us with a thoroughly enjoyable ride of 256 kilometres, without any serious incident or malfunction.

A few more details below……

The Grime and Lustrous Shine

As we got underway up Yan Yean Road in light traffic and under a blue sky, all looked well for the day ahead. And it would be, except that clouds would come and slightly dampen our enthusiasm for the weather, so to speak. Otherwise, on the comfort scale, all was good.

After Whittlesea, along the Eden Park Road, RL Arthur detected that there were only one or two bikes behind him, so we pulled over and waited. Others soon came and reported that John and Vicki’s mount had a bit of an electrical problem. The rest then arrived, including John and Viki. John had determined the problem was intermittent, centred around lighting, so decided to press on, using lights only when necessary.

Morning tea at Broadford was a welcome enjoyment and the modernised Country Soul Café supplied good coffee and clean and comfy facilities (yet again). We all welcomed the chance to warm up, and for a bit of chat and banter.

The ride to Kyneton from Broadford was a pleasure, through picturesque country, some of which had lots of big granitic Yonnies upon it, as well as brown furry things (cows). We traversed the bit of dirt road without incident, but we never found Mount Mogul in the middle of the road. Arthur believed it may have been attended to by Council since he did the recce trip. Perhaps they took it to melt down and reseal the Council carpark.

Kyneton was a welcome sight as it came into view, with the prospect of hot food going into cold bodies. We came to a stop in the busy main street, parked at various points north of the bakery and dispersed in different directions according to our gastronomic preferences.

I was fortunate to share a table and convivial chat, in the bakery with John and Vicki Best and Greg Costello. A shower of rain came and went outside before we departed to join Arthur and the rest of the group in the street.

Homeward bound, we made one more fuel and rest stop at Lancefield. Then onwards to Kilmore, Wandong, Woodstock, Yan Yean, and back to Upper Greensborough. Some exited early to go their own way, while the rest of us said our goodbyes at the BP servo.

Thanks to Ride Leader Arthur for a great ride, to TEC Martyn, and to all for good company.

All Bikes, But One, Had Lamps On

We Still Had Fun

Being Led By Arthur Hampson 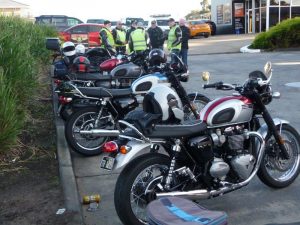 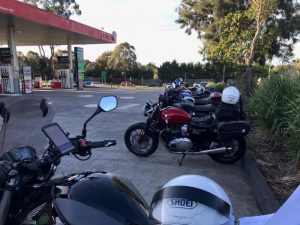