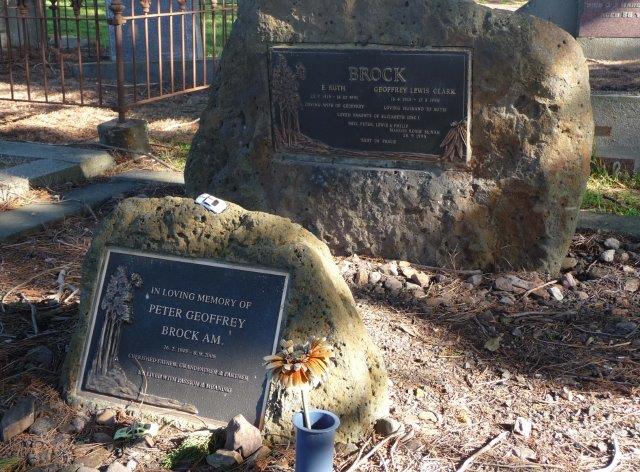 Fifteen steeds assembled, parked in a tidy line as usual, at the Upper Greensborough Caltex Servo on a cool but sunny morning, with fifteen riders plus pillions Mez and Vicki. Two guests were present as welcome participants: Richard Duncan and John Addy. Richard Mason also attended per four wheels, to join in and mark two special stop destinations on the way to Whittlesea.

The weather provided good riding conditions: a clear and sunny sky, little to no wind and a maximum temperature of about 8 to 10°C. However, to me the cold was always there but didn’t really niggle – the sunny outlook was cheerfully warming in its own way.

Paul Clayton was our Ride Leader for the day, with Arthur Hampson as Tail End Charlie.

After the usual greetings, tank-filling, and form-filling, Paul called us to briefing and detailed the route we would take: northeast via Diamond Creek to Wattle Glen for morning tea, thence via Hurstbridge, Nutfield and Arthurs Creek to a special stop before Yan Yean. and another at Yan Yean Reservoir. Then to Kemps Bakery at Kilmore for lunch, via Whittlesea and Wandong. The homeward bound route would be via Kilmore east, Wandong, Woodstock, and Yan Yean and back to the BP at Upper Greensborough.

Paul provided us with a thoroughly enjoyable ‘jaunt’ of 133 kilometres, without any serious incident or significant winter discomfort.

A few more details below……

The Sugar and Cream

A surprising number in the turn-out may have been largely due to the new winter start time of ‘9:30 for 10’, but a good weather forecast and a short ride would also have allayed any fears of cold discomfort. It worked for me at least, as I willingly left a warm bed to join the fray.

I will label the event a bit of a ‘Rock ‘n Roll Gig’ with Little Richard (Mr Haughton) and Big Richard (Mr Mason) in attendance to provide some of the entertainment.

So, we rocked out of the Caltex and rolled down the hill into Diamond Creek and on to Peppers Paddock General Store at Wattle Glen for morning tea. There were a few shenanigans parking, caused by locals occupying all the best spots and leaving us to circle about a bit before settling down elsewhere. I’ve seen galahs and cockatoos do that sort of thing – just saying.

With our innards coated with caffeine and cake, we departed for Hurstbridge, then meandered through Nutfield to Arthurs Creek and westwards towards Yan Yean.

We soon discovered a corner marker and Big Richard alongside his car with its hazard lights on, giving us directions to turn left and rock up a tree-lined gravel track until we rolled to a halt with a pair of magnificent iron gates facing us – the Arthurs Creek Cemetery beckoned. The gravel turnaround was negotiated gingerly and bikes were parked in various states of disorder and disarray – a bit like chooks jostling for the best perch – just saying (again).

Big Richard led us to a bit of a surprise: just inside and left of the main gates is a family plot containing a memorial to one Peter Geoffrey Brock AM, together with the main memorial to his parents. Quite touching and a worthy tribute to Brocky and his parents who were all local to the area. The cemetery sits atop of a high hill and commands magnificent 360° views – well worth a second (or more) visit. So peaceful and in contrast to the sights and sounds remembered, of Brocky roaring around Mount Panorama in a Torana or Monaro.

With our souls topped up, we remounted our bikes and exited the sloping parking area with a bit of trepidation and due care (at least I did as gravel carparks and I are not friends to each other). We were soon back on the main road and shortly were led into a parking area at Yan Yean where all the front-runners were coming out. It seems that Big Richard’s second attraction was closed for the day, so all we encountered was a short bit of U-turn fun.

Unfortunately, John and Vicki found a patch of mud to complicate the manoeuvre, and … perhaps ? …Max Merritt could be heard singing ‘Slip Sliding Away…’ ?

No real harm done – and as one Wag has pointed out, those Beemers have great ‘grounding protectors’ to assist crash bars – cylinders.

A pleasant ride continued via Whittlesea, Eden Park and Wandong to Kemps Bakery in Kilmore for lunch, where we again jostled amongst the cars to park our steeds in a slightly unkempt (can’t help myself) fashion. The standout, however, was Little Richard who parked his W800 in a prime position near the entry to the café, from where he quickly got himself inside and into a prime position on a chair at a table. It has transpired that on previous visits to Kemps, he has been left standing like a Shag on a Rock, with no seat or poor service. Today, he asserted himself as Boss Cocky and attained just rewards in terms of comfort and service.

I was fortunate to join Little Richard at his table along with Pete Hansen and Damian Lewer, and we enjoyed convivial chat about this and that, including aging men’s health issues.

We made no paltry comments about parking or poultry, thus they have been included here in this report – just saying (again).

Homeward bound, Paul led us to Kilmore East, Wandong, Woodstock, Yan Yean, and back to Upper Greensborough. Some exited early to go their own way, while the rest of us said our goodbyes at the BP servo.

Thanks to Ride Leader Paul for a great ride, to TEC Arthur, to Richard Mason for the special gig, and to all for good company.

PS1     (paradoxically, this is not one of my better limericks, but it is my Best one)

Of  Turning Hazards I Have Enquired… (and been informed)

Mud In A Mire Should Never Be ‘Tyred’

May Cause A Scene That’s Not Admired

PS2     I have been asked by a certain Wag to indicate that the number of Triumphs on this run has markedly exceeded that of BMWs. He/she was quite gleeful about that fact. 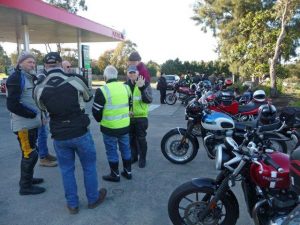 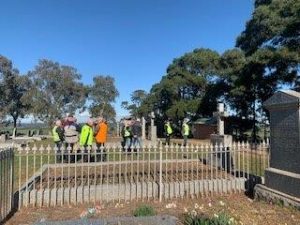 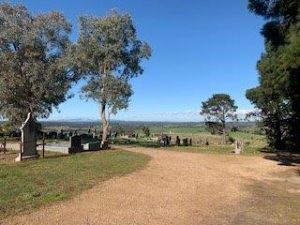 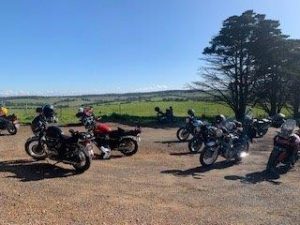 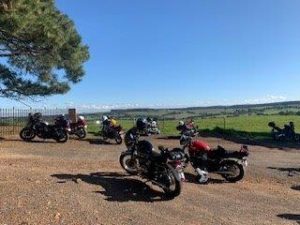 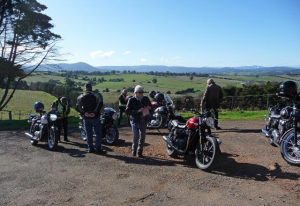