On arrival at the Caltex Servo, I was struck by the orderly line of fine steeds which greeted me….’All the Pretty Horses’ was my thought. The participants appeared to be orderly too (just as well), and engaged in friendly chat. All looking good. I topped up my tank, parked my bike, signed the ride sheet, took a few photos and enjoyed a short meet and greet before the ride briefing…

There were seventeen steeds assembled for the ride, all in fine fettle, with a few exceptional beasts, in my view at least. Capacity ranged from 750 to 1200cc, generally sports tourers, so it looked like we would be a cohesive group without anyone falling back too far. The oldest bike was Franco’s ’53 Black Shadow and the youngest was my 2020 Street Twin. Beemers were the biggest bunch (6) by brand, followed by a troop (5) of Triumphs.

Seventeen riders and two pillion passengers participated. Thanks to Mez McLennan and Vicki Best for attending ‘per pillion’, and a big welcome back to Vicki after an absence from rides.

The weather would keep its forecast pledge: dry the whole day, commencing cool (14degC) and slightly overcast, and would become mild (24degC) and sunny (from Strath Creek on). The current La Nina weather pattern has blessed us with a mild summer, unlike the dreadful and dangerous one of 2020. So, the balmy weather, fine steeds and good company gave great promise to forget the ‘blanky 2020 stuff’ and enjoy the day. To top up our ‘cups of morale’, so to speak.

Back to the beginning….

Richard Haughton, our Ride Leader for the day, called us to our briefing, and gave us a description of the route and morning-tea and lunch stops. He also asked us if we each had a full tank of fuel (yes, he did say that), and then asked for someone to volunteer to be Tail End Charlie (TEC). There was a pause before a voice came over my right shoulder saying ‘yes’ or something similar. I turned to see Rob Mullins with a look on his face like ‘did I really say that?’ That’s the funny thing about volunteering – it’s sometimes a knee-jerk/oh-shit sort of thing. Rob then said ‘I haven’t done it before’ and ‘what do I do?’ He was given the rider list and a grubby safety vest, basic instructions to pick up the markers, and checked to see if he had a mobile phone. He then seemed a bit more comfortable. (That’s how I saw it all and if anyone says I’m lying I say I don’t do lies; a bit of BS, but lies, nay, no, never). In any case, Rob hit his straps quickly and did a great job for the day (more to come later).

We mounted and fired up our steeds, and formed up in a line behind Richard, ready to depart. He led us out and down Diamond Creek Road, amongst traffic, through to the far side of Diamond Creek where a brief muster was done. Then northwards, on to Wattle Glen and Hurstbridge in light traffic, and on to St Andrews via Cottles Bridge, along the Heidelberg to Kinglake Road. A bit of roadworks had generated loose gravel (and caution) before St Andrews. Then, from St Andrews, on and up the goat-track section at a safe and easy pace, to muster again at Kinglake,

From Kinglake we headed west to the Flying Tarts bakery at Pheasant Creek (just short of Kinglake West) where we stopped for morning-tea and met up with President Ian and Vice- President Graham. From St Andrews on, my senses of sight and smell became more in tune with the country around me, while I watched the road ahead and behind, of course. I became aware of how green and healthy the bush and paddocks looked and smelt – unlike the dry, fuel-laden conditions of earlier last year. Especially between Kinglake and Pheasant Creek, the Mountain Ash, (Yellow?) Box, Blackwood and Black Wattle were prolific and lush, and in one large paddock the yield of round hay bales was prodigious.

Morning tea was an enjoyment, with Cheerful Chat and Tech Talk as per usual.

Watered and fed, we got to our feet to re-mount and proceed on the next stage of the ride.

Richard led us westwards to Kinglake West where we turned right onto the Whittlesea-Yea Road and headed northwards towards Flowerdale. Initially we had a good unimpeded run, but then up towards Flowerdale roadworks caused a bit of a delay. Just before Flowerdale, we turned left onto the Broadford to Flowerdale Road, heading north and north-westerly to Strath Creek. A nice, ‘uninhibited’ piece of road through open country. Then right at Strath Creek onto the King Parrot Creek Road, we proceeded northwards through Kerrisdale to meet the Goulburn Valley Highway, where we turned right and proceeded south-easterly into Yea for our lunch stop. The country around Strath Creek and Yea was found to be a bit drier than before – straw coloured pasture and Red Gums, yet it still smelt sweet and the dams were all full. For me, it all invoked memories of great summers of my younger days.

A leisurely lunch was had on the median lawn opposite the Yea bakery, again with chat and tech talk, and a bit more (admiring) focus on the bikes/steeds as they rested, shining under a gentle sun. The standouts for me were, in no particular order: Neal’s Interceptor, Franco’s Shadow, John’s Duke, David’s Thruxton, Col’s T120, and Steve’s CB750 (mostly for the paintwork – lickable!). Yet all the bikes were excellent and a credit to their riders, in my view.

Homeward bound: We struck southwards down the Melba Highway with a detour around the Murrindindi Loop, back down the Melba through Glenburn, and then turned right onto West Bridge Road leading onto the Kinglake to Glenburn Road, to take us back to Kinglake. (David and Mez had continued straight on down the Melba Highway to shorten their long road home.) As we approached Kinglake, I was following Richard on his W800 through the twisties and clearly heard his modified exhaust note. Thus:

To our intrepid Mister Haughton
‘Bout the pipes that you’ve been sortin’
Your trusty Kwaka
Is now a Cracker
It sounds just like a Norton!

We pulled into the Kinglake Servo carpark, for a final muster, before we all split off in our respective homeward directions. We waited for all to arrive, and it soon became apparent that someone was missing as well as TEC Rob. As mobile phones came out and head-counting began, we realised Rob had the rider list, so we gave it a minute or two before deciding on further action. Fortunately, Rob came into view with Greg riding pillion. Greg had run out of fuel so Rob and Greg set to with a couple of plastic bottles of fuel to go back to rectify the situation. All good, and as one Bright Spark observed, Rob was able to gain the Full Experience as Tail End Charlie (LOL). However:

Our dear friend Greg Costello
Became a hapless fellow
To run out of fuel
Is quite uncool
Perhaps his tank is too shallow?

At the end of a grand day out, we departed from Kinglake in different directions, westerly and easterly, to go to our homes. I followed Richard and others to Whittlesea, but continued straight on down Plenty Road alone, rather than down Yan Yean Road back to the Caltex Servo.

I clocked 200km at Bundoora and took that to be a fair estimate of length for the day’s ride. It was long enough for me to enjoy immensely without annoying my old bones.

Thanks to Richard for a great ride, to Rob for a job well done, and to all for good company.

PS 2: Thanks to Steve for two good lines and a tasty paint-job.

PS 3: When Richard asked me to do this report, he suggested I might write it as a poem. I was horrified, thinking he has severely over-estimated my talent and ability, and most of all, my diligence. Recalcitrance rules, thus…

Some like Poems, smooth and slick
Me, I like a Limerick
Short and sweet
Hard to beat
Done and dusted in a tick       (there you go) 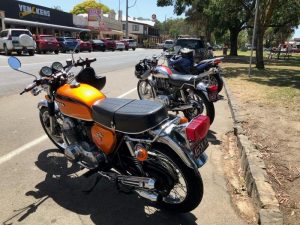 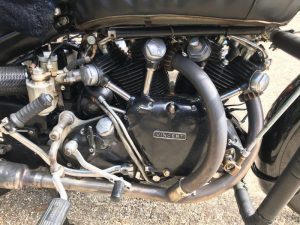 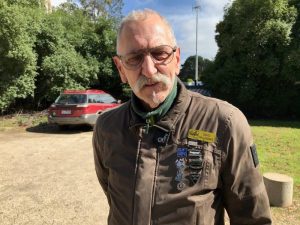 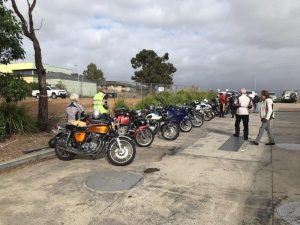 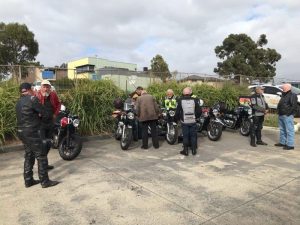 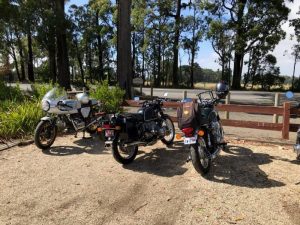 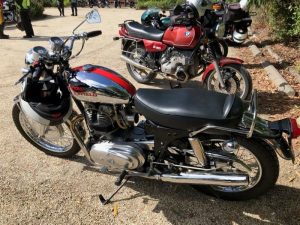