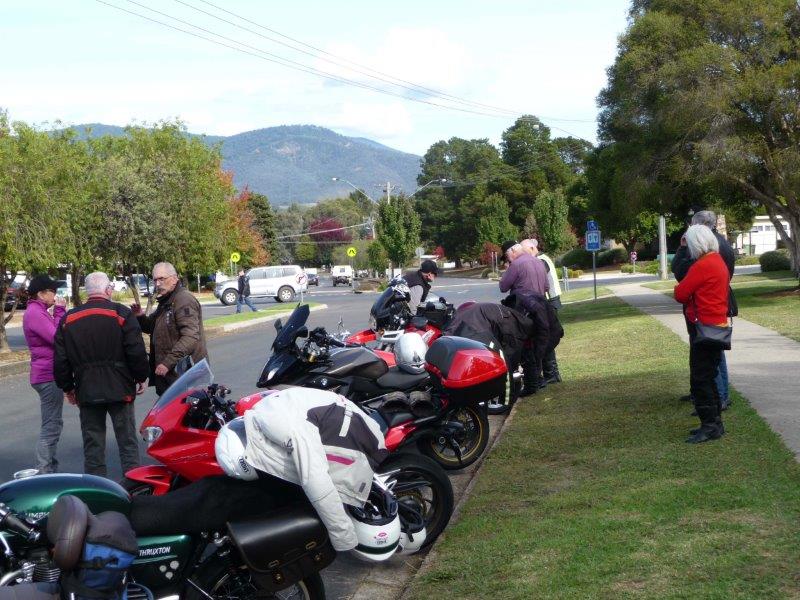 Thirteen riders, a total of 15 souls including the intrepid pillions Vicki and Mez, met at Chirnside Park on a brisk but fine autumn morning. The presence of panniers, top-boxes and tank-bags on most bikes indicated our goal – to reach Mansfield and stay overnight at the Delatite Hotel, before we (some of us) returned to the big smoke.

After Paul Clayton briefed us on a few changes, acknowledging Richard Mason who had organised the ride with Paul, but was unavailable at the last minute, we left the suburbs and rode into the Yarra Valley. We joined the Melba Highway near Lilydale airport, rode alongside the old motorail track past harvested vineyards, and over the Yarra River before bypassing Yarra Glen. Some of us were caught behind slow vehicles, although the power of Ray’s Norton was on display as he neatly overtook a massive crane truck at the last suitable passing spot for a long way. Those behind had a sedate climb up the forested road until past the Kinglake/Toolangi turnoffs where we were able to pass the slow vehicle. Then we rode through more forest with nice sights and smells, eventually moving into more open grazing land and our morning tea/coffee destination in Yea.

A pleasant morning break eating and drinking in the warm sunshine soon came to an end, with most of the group heading off for Molesworth. Just beyond they turned south east at the Whanregarwan road, through Alexandra and via the twisty Skyline road down to Eildon for lunch. More serious bend carving followed as the Eildon-Jamieson Road turned to and fro through the catchment forest around the reservoir. Eventually the fun stopped as the bikes needed a break at Jamieson, with a short break and loo stop at the caravan park near the river. Several riders commented on the good pace being set by the lead rider. Soon the group were off again, firing up their steeds for the last assault on the bends along the Mansfield-Woods Point Road, through Howqua Inlet and into more open country to Mansfield. A final fuel stop gave the riders a chance to stretch their legs, and at least one bike was so tired it lay down for a short nap, before reviving and making the short trip across Mansfield to the Delatite Hotel. By contrast, I had a good walk through the Yea wetlands before a pleasant ride through Bonnie Doon to our destination.

Accommodation was swiftly sorted, bikes were safely parked and the group gathered on the upstairs veranda for a drink and wind-down from the days riding. Two tables had been reserved in the comfortable dining room and as dinner time arrived soon everyone was happily eating, drinking and chatting. Conversations ranged from bikes and riding, to health and the situation in the Ukraine. On our table these topics were interspersed by Ray’s seemingly endless supply of jokes.

Ten to seven am and my alarm went off in our room at the Delatite Hotel Mansfield. The view through the window showed a slightly overcast sky and no rain. It was time to shower, re-pack the pannier cases, take them to the bike, and then make the short walk to the nearby cafe where Paul had arranged a table for our ride group for breakfast. The service was prompt and the food and coffee good.

After enjoying good company over breakfast we were ready to leave for Mt Bulla at 9.00. Some riders separated from the group at this stage in the rally, while the rest of us headed for the mountain in relatively fine conditions. Passing Merrijig we caught up with a small convoy of restored WW2 jeeps trundling up the mountain road, but they obligingly pulled over so we could pass. Further up the mountain was a convoy of a different type – trucks carrying heavy-duty construction equipment. Fortunately these too moved over. The exciting ride from Eildon to Jamieson the previous day having warmed up our cornering skills, we were able to enjoy the challenges of the twists and turns of the road to the alpine village at the top where Paul led us to a tiny cafe for our coffee break. A rabbit was sighted, immediately identified as a snow bunny.

It was a fast ride back down to Mansfield to re-group and re-fuel before returning to Yea. Our thanks to Paul and Richard Mason who both organised this enjoyable rally, and although Richard wasn’t present (recovering from a knee operation) we gave them an appreciative round of applause for their efforts. Vicki and I paused for lunch at Yea and after goodbyes the other riders made their differing ways home.

The Pub and Grub had again proven a great formula for good riding, good fellowship and good refreshment all round. A big thanks to Paul Clayton and Richard Mason and to everyone involved in the ride. 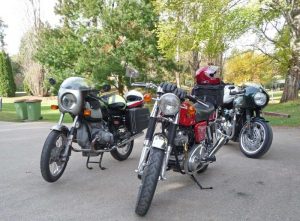 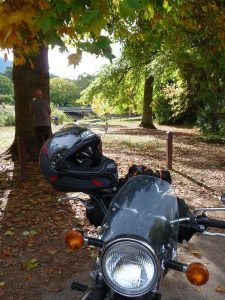 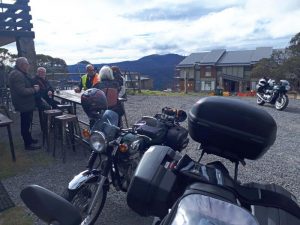 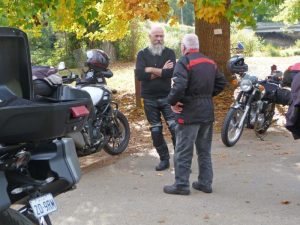