Left home with grey clouds and patches of blue peeping through. It’ll be right, no wet weather gear needed. Twenty mins down the road the sky turned to mush, so donned the wet weather gear. Don’t want to start the day wet.

At the BP servo at Officer, we all gathered for the day. Ride Leader present, that’s positive. Dave and Mez turn up looking dry. Dave then tells me his trousers are only that dark colour due the dampness. By departure time the grey skies lightened, so ‘nine optimistic travellers’ departed expecting better skies ahead.

Off down the freeway exiting for Nar Nar Goon (supposedly an Aboriginal expression meaning native bear; google), then travel east to Longwarry, along the road adjacent to the railway. Then north, back over the freeway, towards Jindivick. We gain altitude as the roads winds its way up through forested terrain to the small township of Jindivick. Which is situated on top of a ridge with spectacular views north and south.

Peter Mathews leads us across the county side, which he evidently knows well. It’s a different ride in a group, you just follow and enjoy the views. No need to concern yourself with directions, turns, or where you might end up. Consequently, it’s about now where my memory fades for the exact turns and how we traversed west Gippsland. So, take the remaining report as an approximation of the route. What is certain, morning tea was at Yarragon, and lunch at Mirboo North. The map shows my recollection of the course travelled. No doubt we went down some of these roads. There was a lot of curves, turns and intersections, and everyone got a good dose of corner marking.

Morning Tea at Yarragon was in the park opposite the shops. We left Yarragon towards Trafalgar, using the secondary road that runs north of the railway. This beats running down the highway. At Trafalgar we turned south to Thorpdale, going up the hill getting more expansive views over the valley below. After lots of curves and more great views of the country side we rolled into Mirboo North.

Lunch was had in the main street, in front of the bakery. The Sun was out showing us what it should do in December. Ian presented Val Smith with an award for her efforts in making the 50th anniversary film. And a couple of gents turned up with some very nice 1970 triumphs.

After lunch we had more superb motorcycling roads to sample i.e., Grand Ridge Road, which took us back to Ellinbank via Allambee South, Hallston, and Seaview.  The views just keep on coming.  We gradually descend from the GR road to reach the flatter land around Warragul South, then heading west making our way back to Nar Nar Goon. Having a break and remarking on a great day with some of the best motorcycling roads west Gippsland has to offer.

Thankyou Peter M for leading a great ride and to Graeme for making sure no-one got lost. 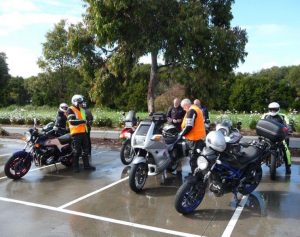 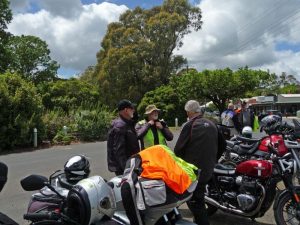 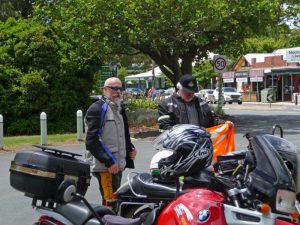 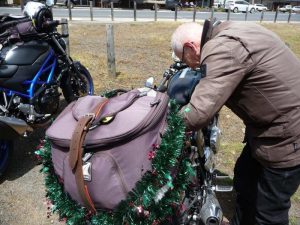 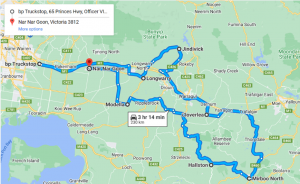 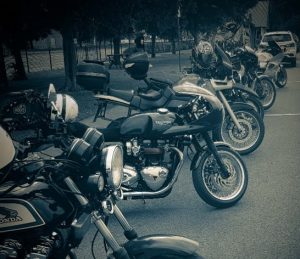 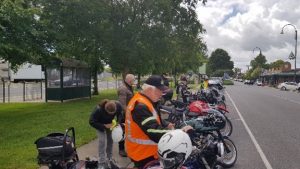 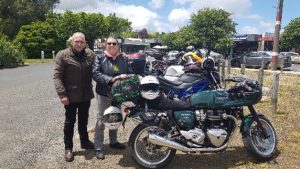 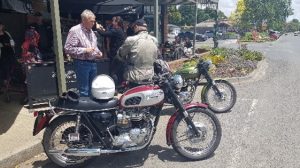 Val with her award