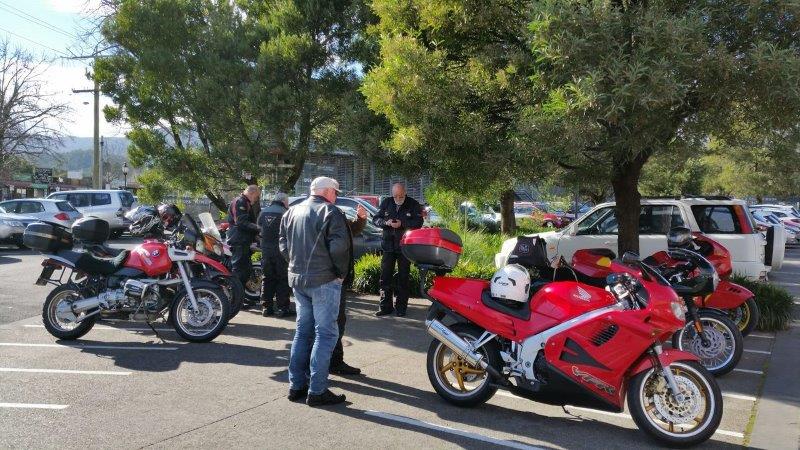 The ride to the start point at Chernside Park was uneventful for me, apart from topping up my fuel, and being around 8 degrees C, with a wind-chill factor around -5 C. (estimate only)
Several riders were already there, rubbing their hands to keep warm. At least there was no wind.
A few small waterdrops starting to fall on us as we waited so it was on with the waterproofs.
New member, Kim Parry was there for his first CMCCV ride, welcome Kim.

Richard arrived to show us the beautiful 1961 Velocette Venom which he has restored. It looked great and gave some real classic bike credibility to the gathering. Richard did not join the ride as he still had some tuning to do, but his appearance was appreciated.

Greg arrived a little after 9am to some ribbing, and the briefing began for the seven bikes and eight riders. A good sized group as we could all stay in visual contact.
Paul Woods led the group with Ian as TEC, and riders buddied up.

From Chernside Park we took the back way past the Lilydale Airport, Yarra Glen, and up the Melba Highway through Dixons Creek.
It was a great ride crossing the Great Divide/Kinglake area then on to Yea for a very welcome morning tea. Gee a warm Café is good on a morning like this.
Although we were on main roads the traffic was very light and riding was easy.
At Yea Richard Sommerville joined the group as Greg left the group.

By the time we reached Yea the light showers had ceased.
From Yea we rode to Marysville where we had a pit stop and regroup. This section included Alexandra, Buxton via Acheron Way.

From here it was over the Black Spur to Healesville.
The Spur really is a fun ride when it has almost no other traffic on it.
The warnings about the dangerous area for motorbikes, the line of green “moss” down the centre of the road, and the sign at the top advising of “oil spills on road” all served to keep me alert! The road was mainly dry thank goodness.
Coming off the mountain we finally rode in sunshine and I had forgotten what wonderful ride it is from here to Healesville. So many curves !

We enjoyed another warm venue and a large range of food.
Over lunch many world issues were discussed and many problems solved, but why does our government(s) refuse to heed our very sound advice ?
It took some effort to get up from the table, the warmth and the company to head off home from here.

Thanks to Paul and Ian for a trouble-free great ride over some classic roads, and thanks to all for good company. 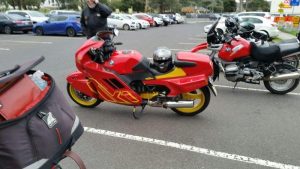 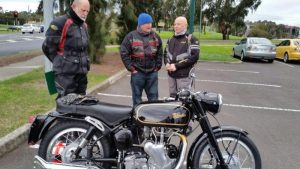