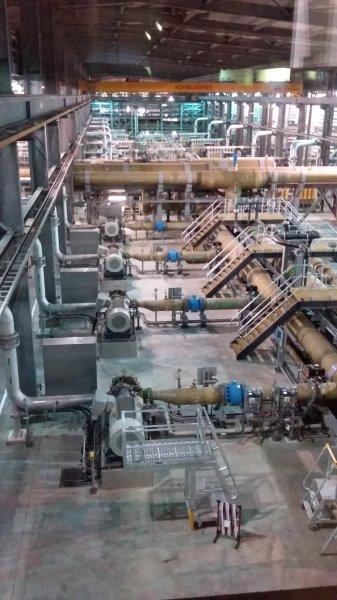 A Visit to Brumby’s Baby

The idea for this ride was to incorporate a tour of the Victorian Desalination Plant in Wonthaggi with some riding to & from the tour, in the beautiful rolling hills of West Gippsland.
Mr BOM didn’t promise us a very favourable day weather wise, but a study of the Wave & Weather map the night before looked like we would be OK.

16 bikes & 2 pillions assembled at the start for a sharp 9.00am departure as we had a tight time schedule leading up to our tour at 11.30am. I opted for a direct route via the South Gippy Highway to our morning tea stop at the Kilcunda General Store to hopefully allow for a little extra time in case something went awry, making us late for our tour.
At Kilcunda we were joined by Chris Price on his magnificent Vellocette Viper & Carol along with Alan & Michelle Prentice & Kam Saraswati.

Absent was our TEC Ed – following some discussion and a phone call or two we discovered that Ed had succumbed to a puncture at the Lang Lang roundabout and was returning home via RACV Total Care. Much discussion followed re TEC being vulnerable to being left behind if he / she breaks down prompting a now change to the ride briefing procedure to hopefully ensure TEC being left behind doesn’t happen on future rides.

After morning tea, we rode the short distance to the Desal Plant in light rain. We were joined by “I’ll do it my way” Mick Boocock and the group rallied inside the massive Desal structure where we met our guide Rosemary for our 1 ½ hour “tour”.
Rosemary was a real character and enthralled us with all the facts & figures pertaining to the construction and operation of the plant. Our “tour” was confined to the lavish upstairs viewing room that looked over the very complex looking confusion of reverse osmosis plumbing into the biggest shed you’ve ever seen, through a triple plate viewing window. Rosemary’s presentation was followed by a questions segment and we didn’t let her down with lots of relevant questions from our well educated & interested group. I was going to regale you with lots of Desal facts & figures but suggest if you’re interested google Aqua Sure or Vic Desal Plant & everything you ever wanted to know is on their website.
After our tour we rode to our lunch stop (in the dry) at The State Coal Mine Café in Wonthaggi.

Following lunch an enjoyable 100km ride through the hills via Loch, Poowong, Athlone, Heath Hill & Bayles (again in the dry) to our finish at BP Officer inbound.
Apart from corner marking going a little astray towards the end, I think everyone enjoyed the day.
19 bikes, 23 people, a great turnout which I contribute to an interest in the Desal Plant tour rather than supporting the Pres on his midweek ride. Just joking – I’m sure that both factors contributed or is that a bit too self-indulgent? Either way it doesn’t matter.

Thanks to Ed TEC & to John & Vicki & Graham for standing in as TEC’S following Ed’s unfortunate departure from the ride. 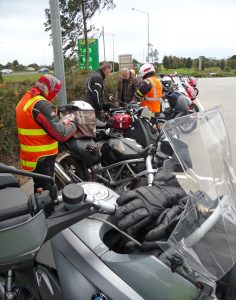 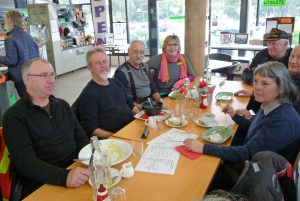 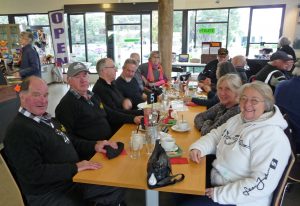 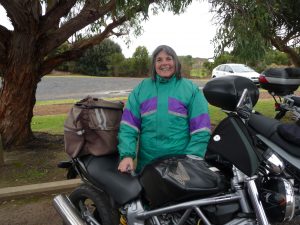 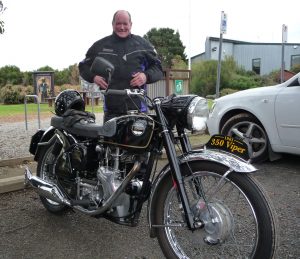 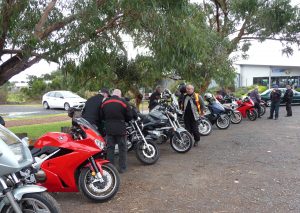 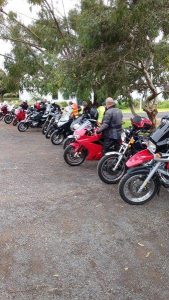 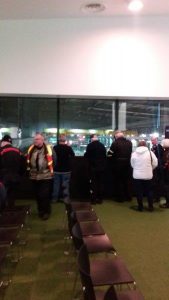 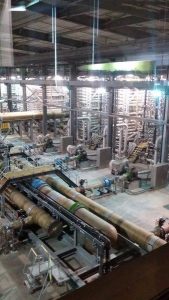