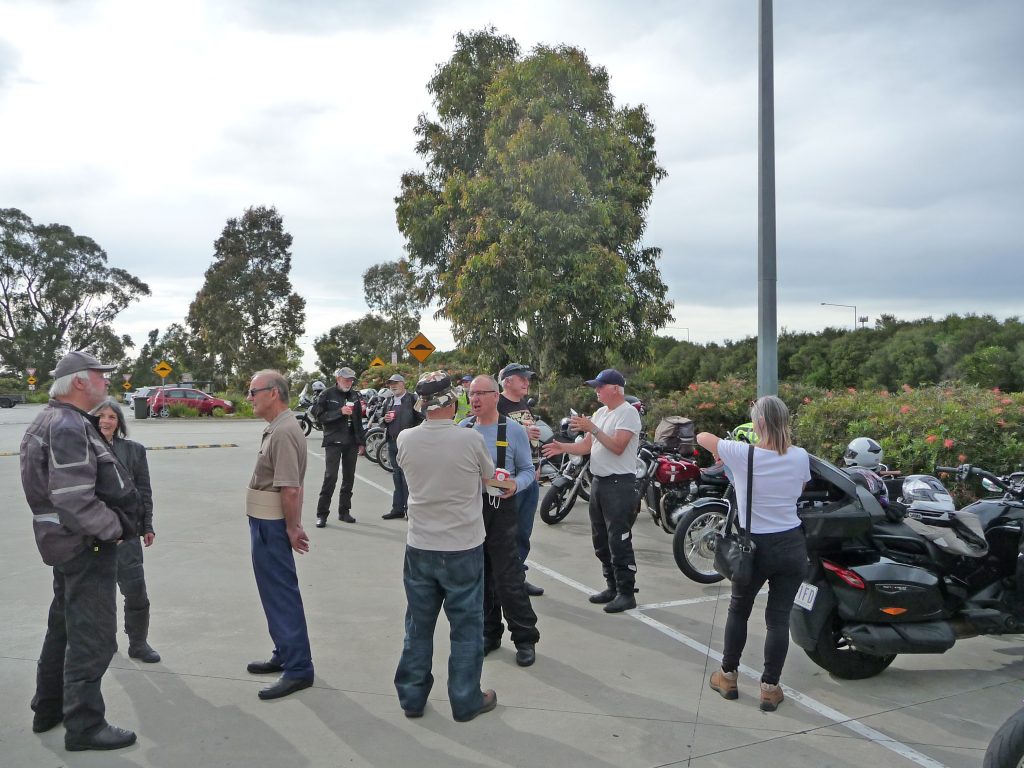 After what seemed like years of Melbourne lockdown we finally were allowed to ride again as a club, albeit with some restrictions still. The weather was mild, although we were all aware that the forecast was for rain and wind later on. But when is a forecast right?

We met at 8.30am at the BP Officer carpark and it was great to see sixteen members and fifteen bikes and a lot of familiar faces, which most of us had not seen since about March!

There were lots of elbow bumps, and just possibly a few clandestine handshakes, although there is no evidence recorded of handshakes, as we “re-met” friends.

To avoid crowding into cafes self-catering was required along with sensible distancing.

After Mike Walker welcomed and briefed us, we started up ready to head off, with Tom and Deborah as tail end Charlie on the easy-to-spot Canam F3.

Sadly, for Rob Mullins, smoke started pouring from his headlight assembly when he switched on and a wiring short forced him to miss the ride. So unfair!

The delayed ride then set off.

We headed off east on the freeway then enjoyed some rural riding through Nar Nar Goon, Garfield, Longwarry and Bulin Bulin using the Old Sale Road. It was wonderful to be back on country roads of this quality again.

While eyes need to be kept on the road some of us did notice Winnie the Pooh, and then a magnificent white elephant high in the gum trees beside the road. (the elephant was 1/10 scale, and was stuffed and only a threat to concentration.)

It was even good to be smelling those country smells again: At least one dead carcass, cut grass, cow dung and diesel fumes.

By 10.45am we were in Willow Grove and pulled into the Blue Rock Lake for morning tea. Conditions were great for riding, being mild, dry and not much wind.

There was a school group at the lake playing games and having stand up paddleboard lessons, as well as kayaking.  All a pleasant backdrop to our morning tea, which we had in the large hexagonal shelter.

The previous six months were discussed in some detail:

I learnt that David and Mez had got married! Congratulations to them both.

I learnt that Graham had a heart attack three week ago, and was here today back enjoying a ride. Congrats to Graham.

Back on the bikes after morning tea we were off through Fumina and Noojee, on the Yarra Junction/Noojee road which provided great winding bends at moderate speed. Because of the rain on it’s way we were heading to Yarra Junction for lunch instead of the originally planned Badger Creek. This was a wise decision from Mike because as we approached Yarra Junction, via Poweltown and Gladysdale, the wind and the rain started. Ridings conditions remained quite good although leaves were falling on us like late Autumn.

This did little the alter the exhilaration of such a great motorcycle route.

By the time we reached Yarra Junction we were in steady but not heavy rain, and while some purchased food/coffees we gathered in the spectator area at the footy oval.

Over lunch some of us put waterproof trousers on over our already damp trousers, which is a wonderful feeling!

Of course by the time we headed off for home the rain had completely stopped, but the waterproofs ensured that we stayed damp for the journey home. Nice.

My home back to home distance was 246km, so after topping up at the BP in Officer at the start, I required no more fuel. I presume this was true for most of us.

It was a great ride Mike, and great way to restart the club riding. 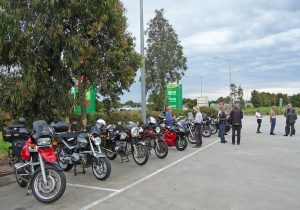 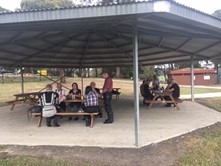 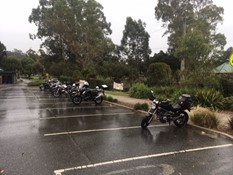 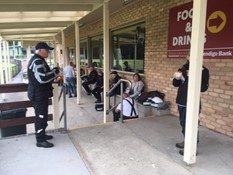 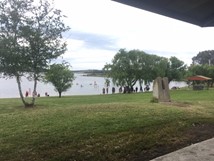