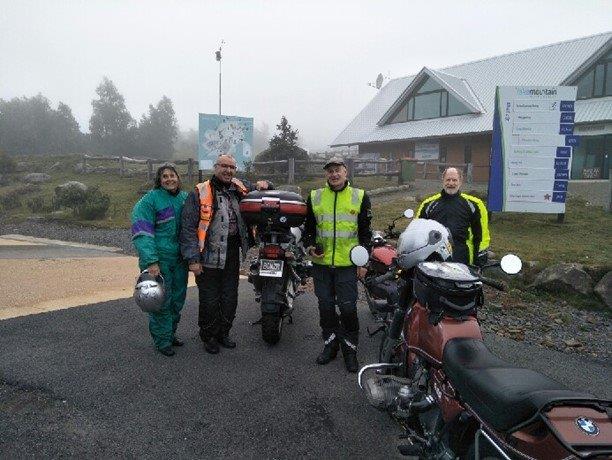 THE ONE AND A HALF SPUR – WINTER IN SUMMER RIDE

All riders, (four misguided souls) assembled at Chirnside Park Shopping Centre for the 9am start.
I apologize in advance for the continuing reference to the weather. However, it was the unexpected factor in the days ride.

So here we go!

At Marysville we decide to continue to Lake Mountain. Half way there the weather closed in.  We had drizzle, light rain, heavy rain and fog.

However, as can happen sometimes with mountain weather it was fine (some blue sky breaking through the clouds at the top of Lake Mountain.  Here we stopped for a well-deserved take-away morning coffee from the Resort Café.

I gave John a rest as TEC.

Next, off to Warburton for lunch!

First, 9 km back down to the Marysville-Woods point Road through (you guessed it) now worsening drizzle, thick fog & heavy rain.

Then a further say 5km to the Woods Point Road intersection.

This necessitated a turn back to Marysville still in said described weather.

Would you believe it was still sunny at Marysville!?

Mike, Ride Leader suggested we make Yea our alternative lunch stoop. We went along with this decision as the weather looked to have good promise in that direction.