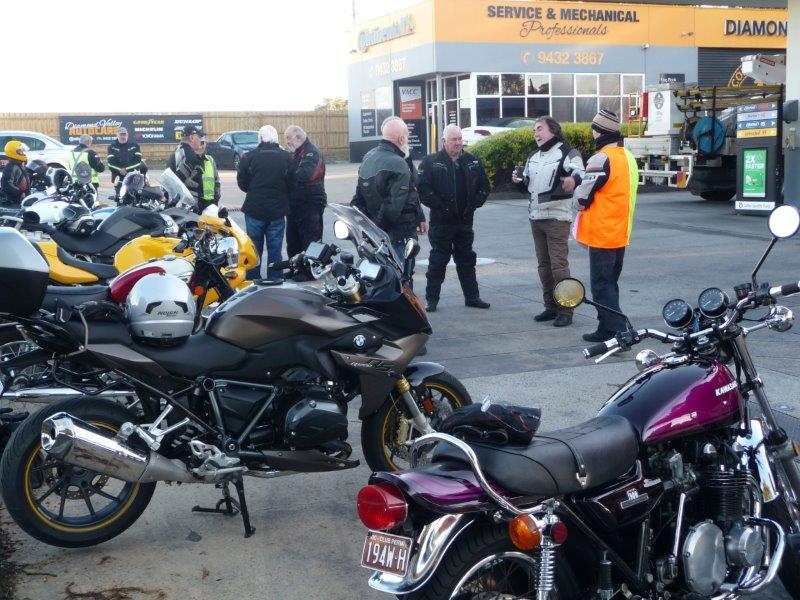 Another lockdown, another resumption of rides, starting to sound a bit like Groundhog Day!

With the latest round of restrictions easing from 18 June the obligatory eNews was sent out for a call to arms for Club members, the June Sunday ride was going ahead, well at least for the first 20 that turned up. Although the State Government had been spoiling our fun of late, the Motorcycle weather Gods had not with a clear and sunny day forecasted, albeit a tad on the cool side.

As I rode to the start point at Greensborough I was hoping that no more than 20 riders showed up, as I was not looking forward to telling someone they can’t join the ride. Luckily I didn’t have to as 14 riders and one pillion were ready to set off at 0900. As I rolled around the ride’s first corner I remembered what I forgot to do at the ride briefing, ask for a ‘volunteer’ to do the ride report, guess I’ve owned that oversight.

The ride destination for the morning tea stop was Lancefield, and with the sun making an appearance through the cloud it looked like a pleasant ride ahead. As we made our way north along Yan Yean Road the clouds closed in and the temperature dropped accordingly. No probs I thought, the sun will show up soon. The ride then brushed past Yan Yean Reservoir, north onto Plenty Road before heading west on Donnybrook Road. By the time we started heading north again on Merriang Road towards Wandong the fog had shown up and going by how my fingers were feeling the temperature had dropped further – great training for the upcoming Brass Monkey Rally.

After leaving Wandong we went under the Hume FWY, turned right onto Orgartys Road to Kilmore East, with a regroup just before the lights at the Northern HWY in Kilmore. As the riders pulled up behind me I could tell by the faces peering out from the helmets that we were all feeling the cold and looking forward to a hot drink at morning tea.

From Kilmore we headed north towards Heathcote, before getting off at Back Creek Road in order to take High Camp Road across to the Lancefield-Pyalong Road. As I turned onto this road and headed south towards Lancefield the sun briefly reappeared, but once again was absent by the time we rolled into Lancefield. Knowing the effects of cold weather on the bladder I chanced on a parking spot halfway between the public toilets and the bakery, with a split of about 50-50 of the group heading in opposite directions.

As we stood around trying to warm up talk was on to things, how cold the ride to Lancefield was and where was the ‘bloody’ sun. Not sure if someone had sacrificed a chicken or performed some weird voodoo ritual, but literally as we were about to leave and make our way to Yea the sun came out!

From Lancefield the ride headed north along the Lancefield-Tooborac Road before turning right onto West Road to make our way to Pyalong. West Road, like High Camp Road from earlier in the day are narrow, hilly and windy country roads, perfect for riding.

From Pyalong the ride crossed back over the Northern HWY and east along the Seymour-Pyalong Road towards Tallarook. From Tallarook we went via the Upper Goulburn Road to the Goulburn Valley HWY, then onto Yea for lunch where we were joined by Gary (Moore) on his new Indian Chief. Yea as usual was busy with day trippers from Melbourne and fellow motorcyclists.

The final ride leg of the day was south to Kinglake via the Melba HWY and West Bridge Road. As per most roads we covered on the ride, West Bridge was littered by the evidence of the previous week’s storm that had caused widespread damage across Victoria.

At Kinglake we took in the sun and time to have one final chat before heading our separate ways home. Reg (Hammond) in his eagerness to leave threw his leg over the nearest blue Bonnie he could find and started it up, only to be tapped on the shoulder by Rob (King) to advise him this blue Bonnie was his and Reg’s blue Bonnie was a few feet away.

Although a cold start to the day the sun came out and it was good once again to catch up with kindred spirits and go riding after a few weeks of being in lockdown. 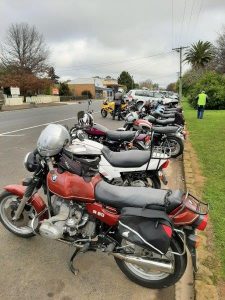 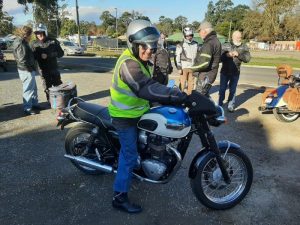 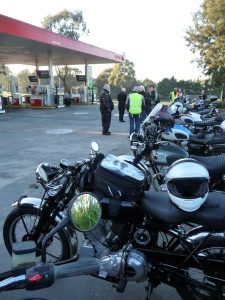 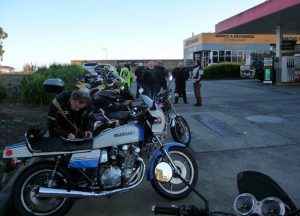 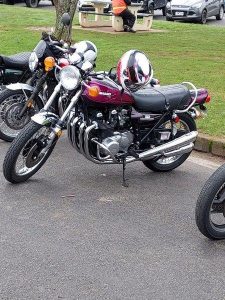