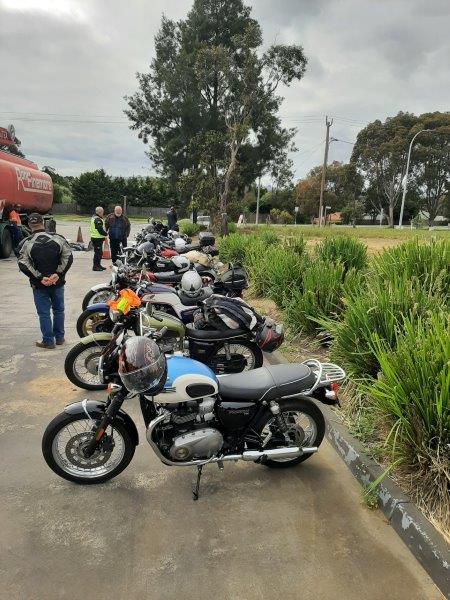 With five months since the last Melbourne Sunday ride it was good to be able to meet up again and go for a ride. The start point was Greensborough and 13 riders turned up, including new member Andrew (Green) out on his first run with the Club. The forecast at the start of the week was for up to 20mm of rain but by Sunday morning this had done a complete 180 with no rain and only blue above to accompany us.

First leg was to Woodend for the morning tea stop. The ride to Woodend was via Yan Yean, Wallan and Romsey. The Wallen-Romsey road is a go to for many who live in the northern suburbs when in need of a quick ride as it has straights, plenty of bends and hills. A recent addition though to keep an eye out for are the ever-increasing number of potholes! Not sure if road maintenance work has been affected by Covid-19 restrictions but across country roads the number and size of these hazards has definitely increased.

Although no rain was encountered it did get pretty cool from Romsey to Woodend, especially considering it was one of the last weekends in Spring. The morning tea stop was the usual of a coffee, something to eat and a chat with Club members that probably haven’t been seen for half a year.

From Woodend the ride took us north to Three Chain road at Carlsruhe. From here we took Chases lane for a loop up through Piper’s Creek, Sidonia and Pastoria. These roads are at times narrow but are great for riding with plenty of sweeping bends, straights and a few rolling hills. A great bonus is the next to no traffic, so you can either take your time and enjoy the scenery or open it up a bit and get a bit of even wear across the tyres. After coming back through Piper’s Creek the ride made its way to Three Chain road again before a ~25k ride to Lancefield.

Lancefield was the norm of a few bikes about and day trippers from Melbourne. After lunch the last leg of the day’s ride was back to Greensborough via Kilmore, Wandong then Whittlesea. Most riders peeled off along the way with four of us arriving back at Greensborough for a quick farewell before heading home.

All up the ride covered ~260k with all that started making it back, which is always the first aim for the day. Special mention goes to Colin (Borthwick) for achieving the most gear changes for the day on his immaculately presented 1972 Commando. Not that Colin rode any further than the rest of us, just that he kept forgetting that the gears on the Norton go the other way to his Triumphs. The speed Colin was flicking that gear level it’s amazing he didn’t end finding reverse!

Thanks to Phill (Young) for doing a great job as tail end Charlie. 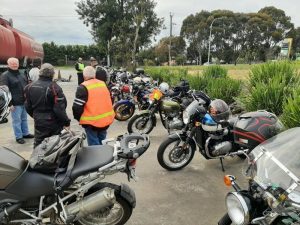 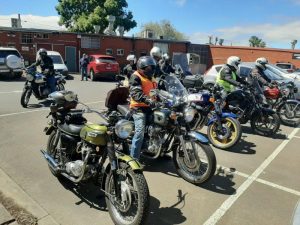 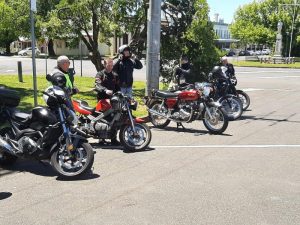