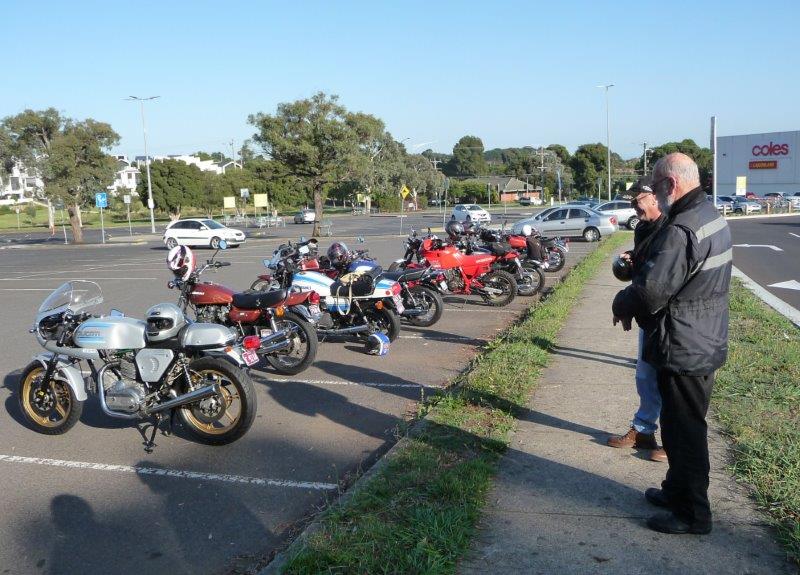 Well its amazing what five days can make, from rain and mud on Tuesday to glorious blue skies and warmth on Sunday. The forecast for the day was 31 degrees, so the expectation was for a few more riders than the five that braved Tuesday’s visit to the Point Cook RAAF museum.

The ride was starting from Chirnside Park with Gary (Moore) leading his second ride in six months and Yolanda riding pillion. It was good to see Gary on the GT750 ‘water bottle’, as we see few big old two-strokes on rides. Now the environmentalists out there may frown on these machines and the EPA wanting to write up a ticket for the emissions being pumped out the exhaust, but as ride lead if we couldn’t see Gary, all we had to do was follow our noses.

As detailed in Sprocket the meet-up was at the designated Chirnside start point at 8.30am for a start at 9am, not too difficult. By 8.50am there was a good turn up of 15 riders on 8 different marques. Conspicuously though the VP was missing, which was very unusual for Graham (Boulter) to miss a ride on such a nice day. The mystery was soon solved just before nine as Gary received a call from Graham asking if the ride was still on! Yes it was, but not from Baxter where Graham was calling from, the start point for the 3rd March mid-week ride. With no time to make the start at Chirnside Park Graham headed for the morning tea stop at Emerald.

The ride brief was short and sweet, Gary was leading, Phill (Young) was TEC, corner marking was in play, and a good ride laid ahead of us. Gary took us out north a little before west through Coldstream then south towards Monbulk. From here we did a big loop before coming back through Monbulk and down to Emerald for the morning tea stop. Graham duly turned up on his Boldor, ready for a trouble free ride. With a variety of pastries scoffed and washed down by coffee it was back on the bikes for the ride to Healesville.

From Emerald we headed south towards the Princess HWY before heading north on the journey to Healesville. Gary took us on some great riding roads with plenty of hills and bends. Sitting a few bikes behind it was a great sight to see the ‘water bottle’ under load heading up the hills. It certainly made it easy to know where Gary was or had been. The journey north continued as we finally made our way into Healesville past the edges of the sanctuary.

As we rounded the last turn before the Beechworth Bakery I marked the entrance to the bakery and waited for the riders to come in, and waited, and waited, and waited. There were queues forming out the doors of the bakery as a power outage had hit the immediate area, which was not the only one as Graham had lost electrics on his Boldor and was stuck on the side of the road a couple of ks away.

As the queues were getting longer by the minute a few decided to move on and look for food elsewhere or head home. After quick farewells I back tracked to where Peter (Andrews) and Phill (Young) were waiting with Graham on the side of the road. The electrical fault was unable to be identified so it was over to the RACV to get Graham and the Boldor home, a process that was becoming all too familiar for him.

With the RACV truck on the way we left Graham with a drink and his thoughts and headed for home. All in all a great day of riding with weather to match, thanks Gary for leading the group and Phill for TEC duties. 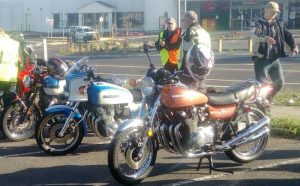 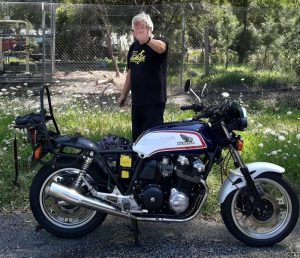