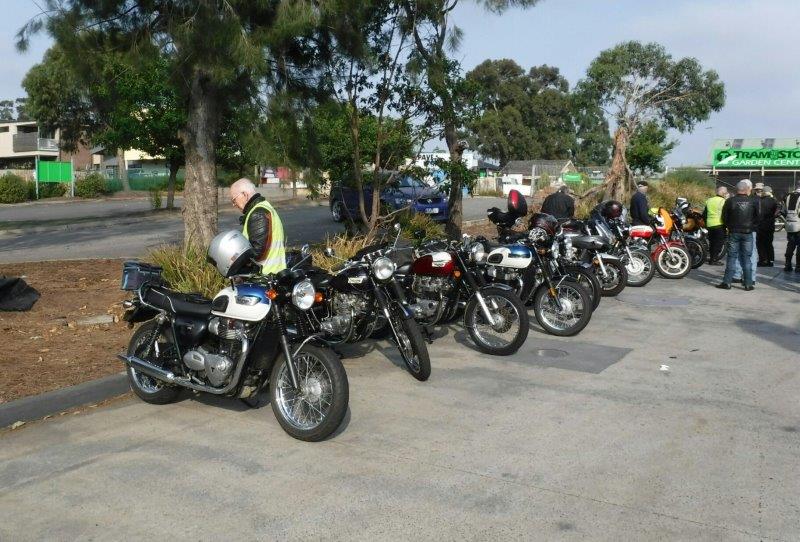 Being ride leader for the first club ride of 2020 and the start to the new riding season, I had been keeping a keen eye on the weather leading up to the day.  With extreme temperatures in the weeks leading up, I wanted to know about local bushfire warnings to change the planned ride, but what we got was a warm 26c day with the risk of a late thunderstorm, no big deal. Members arrived at the designated rendezvous location at the Tram stop in Plenty.

It was looking good as 17 bikes (classic and modern) lined up for the days ride. The plan was to do a lazy loop or figure 8 though Yarra Glen, Kinglake and Healesville. Ride buddies assigned, allowing riders to track other riders, so no one goes missing or gets lost. I put my hand up for the job of writing up the report, John (Best) put his hand up for the TEC role (thanks John).

I gave the ride brief, outlining where we were going, stops and fuel points, the normal cautions about wildlife and push bikes, and a reminder about corner marking duties. We were heading off though Yarrambat, Arthurs Creek, St Andrews and the back way off to Yarra Glen and then King Lake for morning tea, then Flowerdale and looping back around to Healesville for lunch, weaving our way back through Yarra Glen to our starting point.

Heading of through Yarrambat we turned toward Arthurs creek, a kangaroo decided it wanted to race me, luckily it kept to the paddock side of the fence. We mustered at Cottles bridge, giving everyone a chance to group up (Graham commented that the push bikes were as thick as the bugs on our visors). Turning towards St Andrews and our first side trip down Butterman’s Track towards Yarra Glen before heading along the Melba Highway the short distance to the Healesville – Kinglake road and Morning tea.

But things don’t always go as planned! Making good time and getting onto the open sweeping road to Kinglake, I was coming out of a nice bend planning to accelerate into a good long straight, I twisted the throttle, only to have the bike slow, knowing something was wrong, I headed for the best place to pull up safely.

Riders started to pull up around me, I diagnosed the problem as throttle related, I quickly worked out the cable had broken. With so many bikes grouped up on a bend, James took several bikes to King Lake to wait for news, getting them out of harm’s way.

Needing a few extra spanners, more than included in the standard Suzuki tool kit, someone on a British bike would have some tools, I went to the obvious choice Phil (Pilgrim) a noted Triumph rider, to find that he was on a BMW and NO tool kit in sight, so Martyn (Goodwin) pulled his tool bag out of his Vincent and offered up the needed spanners. Petrol tank off it became apparent that the Suzuki wasn’t going to fixed roadside.

A quick discussion followed as my ride day had just ended, it was going to be a tow truck job for me. Richard (Sommerville) was to take over as ride leader, a quick briefing on the route I had planned to use and the group was on their way, John (Best) waited long enough to ensure I had mobile contact with RACV before he too joined the others.

Waiting on the side of the road taking in the tranquilly of the natural bush, Kookaburras singing to one another in the trees, the serenity of the area, only shattered by the roar of the modern Harleys as they ‘blapped’ their engines as they went past.

As I watched the group leave disappointed that my day had prematurely ended, disappointment also that I had held the group up and put the thunderstorms that bit closers. The tow truck arrived shortly afterwards, we loaded the Suzuki gently onto the tray and tied it securely down. Heading home in time for lunch, after a short but enjoyable ride and knowing that I did get the better part of the ride before my untimely mishap.

Late afternoon I received numerous calls from members checking that I had gotten safely home, after reassuring them all was well, they then proceeded to rave about the ride and that they had indeed beaten the thunderstorms home, all arriving dry after an enjoyable day.

With half of the group at Kinglake waiting on the verdict on Peter’s Suzuki we stood around chatting about what else, bikes! Then I got a call from Peter saying his ride for the day was over and that Richard would lead the group on his intended ride. Richard and the rest of the group rolled into Kinglake a short time later to lead us to our next destination, Flying Tarts for morning tea! We covered the 10ks from Kinglake to the Flying Tarts bakery in no time. The topic of conversation at morning tea was of course throttle cables, with many riders reliving their experiences of when a cable plays up and impromptu solutions.

From the bakery we headed west for the Whittlesea-Yea Road then made our way north up through Hazeldene and Flowerdale. Then it was time to head south along the Break Oday Road, Melba HWY and finally on to the Myers Creek Road for lunch at the Beechworth Bakery at Healesville. This route from Kinglake to Healesville is truly a great ride. Many in the Club would have ridden these roads before but they never get boring. To top it off the roads were dry, the skies clear and all the bikes made it to the scheduled lunch stop.

As many of us were aware that a thunderstorm was forecasted in the afternoon, we kept one eye on our lunches and the other on the BOM website. With the radar starting to look a bit ominous to the north we decided to end the ride at Healesville rather than back at Greensborough. With the obligatory farewells out of the way the group quickly dispersed.

Thanks Peter for planning a great ride, just a pity you couldn’t enjoy the fruits of your labour. Special thanks also to Richard for steeping in and taking over lead rider duties and John for being TEC.

Although I didn’t finish the ride it all worked out well, why, a few years back at a club meeting Marty gave a talk on the benefits of the RACV total package and what it covered. A little checking and I upgraded my membership to Total Care, a few extra dollars a year to give peace of mind. Should a break down occur I would NOT have to call my wife, who would have to drop everything to get the trailer hooked up and come to my aid, she is very pleased we made the change to our RACV cover.

With the willingness of the members to step up and fill my role as ride leader, to do Part 2 of the ride report and checking up on me, this made the day a good day for all. 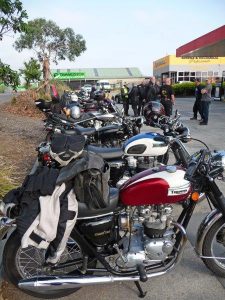 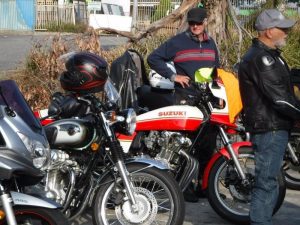 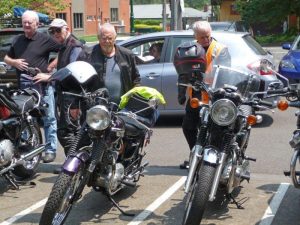