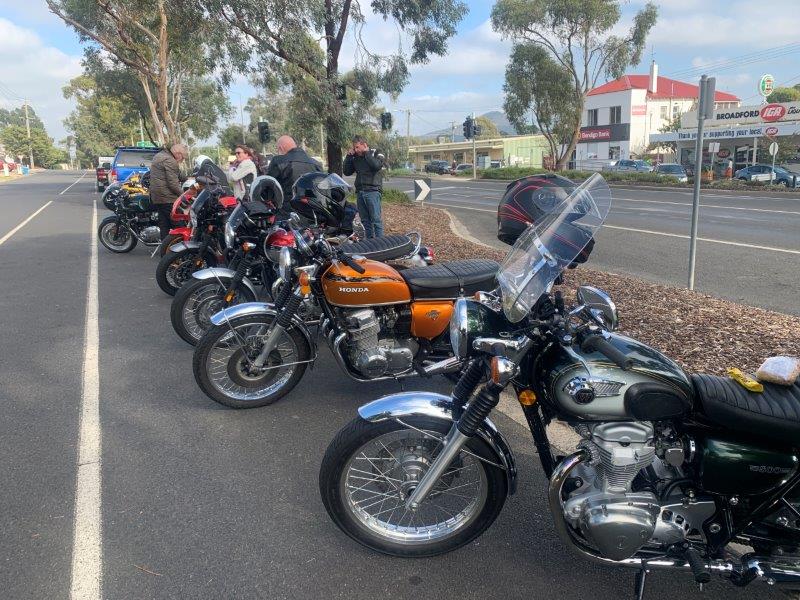 Eleven steeds assembled for the ride at the Upper Greensborough Caltex Servo, thus eleven riders plus Mez as pillion with David, came together on a balmy Autumn day as participants.

Apart from a bit of (Whittlesea North to Kinglake West) mist, the weather would be as predicted and provide near-perfect riding conditions: mostly clear skies, little to no wind and a maximum temperature of about 20°C.

Club Captain Jimmy Linton called us to briefing and detailed the route and stops we would take: northwards to Whittlesea, Kinglake West, Flowerdale, and Strath Creek, thence westwards to Broadford for morning tea at the Country Soul Café. From Broadford, northwards to Glenaroua and Hilldene, westwards to Tooborac, thence southwards to Lancefield for a fuel stop, and eastwards to Kilmore for lunch at Kemps Bakery. From Kilmore, homeward bound via Wandong, Woodstock, Yan Yean and back to Upper Greensborough.

Jimmy asked for a Tail-End Charlie and Ashley Scott volunteered. He then asked for a Ride Reporter and while he seemed to be looking at me I didn’t flinch; but then my right arm began to lift – a case of ‘involuntary volunteering’, contrived by Richard Haughton. As penance, Richard will assist as Scribe #2 for this report.

A thoroughly enjoyable ride of about 260 kilometres was had, without any serious incident or malfunction. Just an embarrassing ‘glitch’ or two by me.

The Noisy Tappets and Oil Leaks

I was focussed on my ’72 Daytona’s performance after having some tuning work done recently. On Saturday arvo I did the usual preparation and then started it up – a bit rough at first, but then it idled ok. I had both fuel taps open, because I suspected a slight blockage in the RHS fuel line. On Sunday morning it started easily with both taps open and settled down to a fast idle to warm up. I got my gear on, turned the LHS (reserve) fuel tap off and departed from Macleod. The bike seemed to be running smoothly until I hit the 80 kph Greensborough Bypass, where it gave hints of roughness – just a few minor ‘barks’ before I pulled into the Caltex to join the ride group.

I filled my tank and joined the group for a chat before Jimmy’s briefing. At this point I made the decision to run the bike with both fuel taps open, to see if it would run any better. If it didn’t I would pull out of the ride and head for home.

After briefing we got underway and I was soon put at ease that the Daytona was running smoothly at all speeds, so I started to relax and enjoy the ride.

However, as we approached Whittlesea, I was running last except for TEC Ashley behind me, when I spotted a Classic Japanese bike and rider which appeared to be Phil Young and his Suzuki, pulled over onto the verge. I thought ‘couldn’t be, could it?’ but pulled over a little way on and spoke to Ashley. We decided Ashley would go back and check while I would wait…… False alarm: very similar bike but not Phil. The embarrassment began for me, yet Ashley kept calm and affable about it.

From Whittlesea it was a game of catch-up, picking up David and Mez who were waiting patiently at Flowerdale, as well as Gary Moore who had joined the ride, before meeting the main group at Strath Creek and proceeding on to Broadford.

Morning tea at Broadford was a welcome enjoyment and the modernised Country Soul Café supplied good coffee and clean and comfy facilities. At one point I noticed Jimmy riding off alone and was told ‘he’s going to get fuel’. (An opportunistic omen unseen by me).

I would soon disconnect, yet again, from the main group.

What happened was this: after Tooborac, heading south to Lancefield, going uphill and down-dale, I suddenly felt a little jerk (don’t say a word), a very short loss of power, so to speak. I thought it odd but ominous, as I had been confident of making it to the fuel stop at Lancefield. After about another kilometre, it was near-certain I was out of fuel, with the reserve tap already on, and I rolled to a halt on top of a hill, 20+ kilometres short of Lancefield. TEC Ashley pulled up beside me while I checked that the tank was dry. Ashley decided to go on ahead, inform the main group to head on to Kilmore, and bring a small container of fuel back to me. Again, he was calm and affable –  totally unflappable – he should have been a pilot!

While I waited, I tinkered with plugs and fuel lines, and had a friendly chat with a bloke in an old Buick who stopped to help but didn’t have his fuel can with him. Taking in the scenery, I thought I could hear a faint rendition of The William Tell Overture – sure enough, it was the Cavalry – Ashley and Richard approaching from the south, but it was parallel twins, not trumpets or bugles that I had heard.

Brilliant – 5l of fuel in a new can, borne in Richard’s smiley bike-pack. You blokes are the real deal, definitely not F-Troop. (Fuel in, and on to Kilmore for a full tank and a 10 minute lunch with the main group, before we all headed for home, except for David, Mez and Gary who plugged on towards Warburton).

Over to Richard, Scribe #2, who had been waiting with the main group at Lancefield…….

The minutes ticked by as we waited for our TEC Ashley Scott to arrive and some 10 minutes later he cut a lone figure as he delivered the news that Daisy the Daytona had miscalculated her drinking habit and left our Regalia Officer Ian Young some 20klms short of a refill.

After Ashley negotiated a transaction for a container and fuel, the rescue mission was in play.  Accompanying Ashley to the scene I was absolutely devastated to see my little mate in such a situation.  He had left himself open to all sorts of barbs, but then again what goes around comes around.  Hence, a small poem for Ian:

I was sitting with my little bike

Just near the cattle farmer

And was thinking about this bloody thing

I think they call Karma

It could be you

Just sitting near a farmer

Make sure you fill

To have your thrill

And escape the dreaded Karma.

Thanks to Jimmy for a great ride, to Ashley and Richard for their compassion and jobs well done, and to all for good company. Apologies from me for any inconvenience caused.

To Run Out of Gas 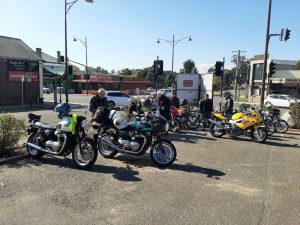