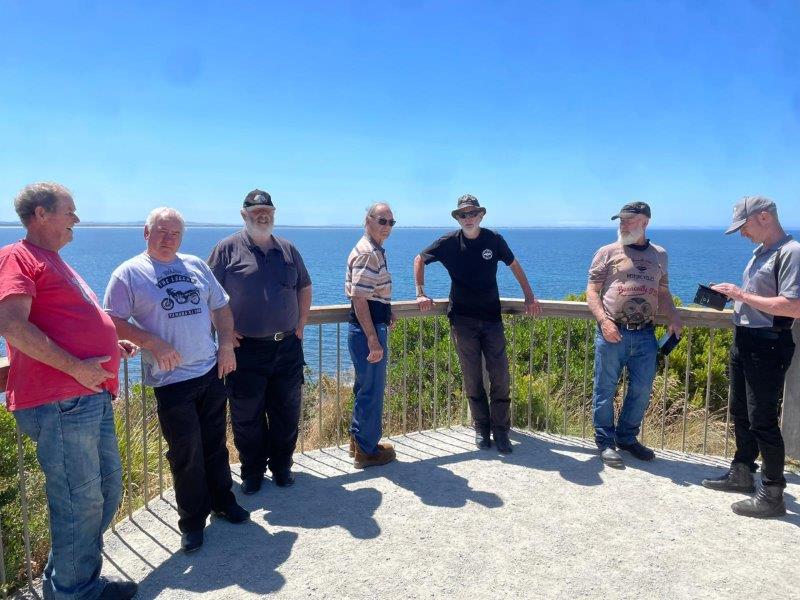 This ride was planned for August 2021, but as most things we tried to achieve in 2021 the planned ride was postponed but finally managed to happen on Sunday 23rd Jan.

The weather was forecast to be mid 30s so I didn’t expect a high participation rate on the day, eight members attended the Southern Departure point and after the usual ride spiel we headed off a little behind schedule at 9.10am. No mention here of why we were a tad late leaving, nor any blame pointed at anyone, you can thank me later Arthur.

Our ride took us through Bales, Ripplebrook then to Poowong for morning tea, great motorcycling roads we all agreed when we arrived at Poowong.

After MT we rode to Bena then on towards Inverloch and the Cape Patterson Road.

An enjoyable break from riding was had taking in the spectacular views of the coastline at the Eagles Nest lookout on Cape Patterson Road, whilst at the lookout we managed to discuss all issues relating to covid, tennis opinions were rallied and the problems of the world were solved.

We then rode to The Wonthaggi Coal Mine Café for a leisurely lunch and were joined by Alan’s wife Michelle.

Following lunch the ride left Wonthaggi, turned North at Dalyston and followed the tourist drive through Kilcunda Gorge to Glen Forbes. From there we rode through Kernot (all managing not to overshoot the corner at the Kernot general store), onto Nyora, Lang Lang and finished the ride in Pakenham not BP Officer inbound as planned, due to the Cardinia Road freeway on ramp being closed.

Due to the small number in the group, we rode at the speed limit for most of the day which blew the covid cobwebs out of our systems (both machines and riders).

Yes it was a bit warm, but bearable and by all accounts those attending enjoyed the day.

Club Captain Jimmy fell foul to the down side of riding with your jacket cracked open a bit on a hot day by welcoming in a bee that stung him on the chest.

Other than that, an incident free day, corner marking worked as it should and no I didn’t get lost Bolts.

Thanks to Tom for your TEC duties.

P.S. I elected to write the ride report for a number of reasons, namely: – 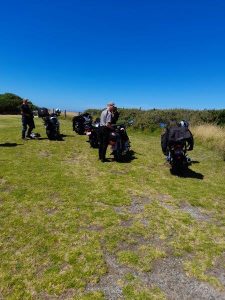 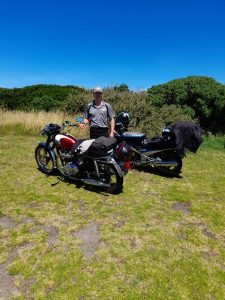 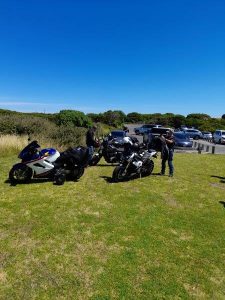